It is said by members of the LDS church that in the last days the Constitution would “hang by a thread”.  This statement is often used in conjunction with the idea of the government of the United States collapsing. I have read many books regarding “last days prophecy” and know full well what has been recorded in the scriptures and in visions. I don’t want to discuss the specific visions and scriptures and prophecies in this post. Rather, I simply want to explain the story behind the phrase “hanging by a thread”.

Several members of the church say that the Prophet Joseph Smith used the phrase, “hang by a thread.” However, most do not quote Joseph directly nor say exactly when and where he said it. They merely paraphrase something Joseph said once upon a time. Hence, these statements are not taken to be direct quotations. However, there is one place where Joseph was purported to have been quoted directly. It is referred to as the White Horse Prophesy.

What is the “White Horse Prophecy”?

“Joseph Smith is alleged to have uttered a prophecy in 1843 alluding to the four horses in the Book of Revelation (Revelation 6:1–8). This was recorded by two Church members, Edwin Rushton and Theodore Turley approximately ten years after Joseph’s death. There is no contemporary account that was recorded during the Prophet’s lifetime.”

Here is the excerpt from the journal of John J. Roberts:

“…While this conversation was going on we stood by his south wicket gate in a triangle. Turning to me, [Joseph] said, “I want to tell you something of the future. I will speak in a parable like unto John the Revelator. You will go to the Rocky Mountains and you will be a great and mighty people established there, which I will call the White Horse of peace and safety.” When the Prophet said, “You will see it,” I said, “Where will you be at that time?” He said, “I shall never go there. Your enemies will continue to follow you with persecutions and they will make obnoxious laws against you in Congress to destroy the White Horse, but you will have a friend or two to defend you and throw out the worst parts of the law so they will not hurt you so much. You must continue to petition Congress all the time, but they will treat you like strangers and aliens and they will not give you your rights, but will govern you with strangers and commissioners. You will see the Constitution of the United States almost destroyed. It will hang like a thread as fine as a silk fiber.” At that time the Prophet’s countenance became sad, because as he said, “I love the Constitution; it was made by the inspiration of God; and it will be preserved and saved by the efforts of the White Horse, and by the Red Horse who will combine in its defense. The White Horse will find the mountains full of minerals and they will become rich. You will see silver piled up in the streets. You will see the gold shoveled up like sand. Gold will be of little value then, even in a mercantile capacity; for the people of the world will have something else to do in seeking for salvation. The time will come when the banks of every nation will fall and only two places will be safe where people can deposit their gold and treasure. This place will be the White Horse and England’s vaults. A terrible revolution will take place in the land of America, such as has never been seen before; for the land will be left without a Supreme Government, and every specie of wickedness will be practiced rampantly in the land. Father will be against son and son against father; mother against daughter and daughter against mother. The most terrible scenes of bloodshed, murder and rape that have ever been imagined or looked upon will take place. People will be taken from the earth and there will be peace and love only in the Rocky Mountains. This will cause many hundreds of thousands of the honest in heart of the world to gather there, not because they would be Saints, but for safety and because they will be so numerous that you will be in danger of famine, but not for want of seed, time and harvest, but because of so many to be fed. Many will come with bundles under their arms to escape the calamities for there will be no escape except only by escaping and fleeing to Zion…”

(For the complete text, use this link: https://www.fairmormon.org/wp-content/uploads/2011/12/cobabe-whitehorse.pdf)

The Position of the LDS Church on the White Horse Prophecy

In General Conference, October 1918, Joseph Fielding Smith explained the policy of the Church on revelations and visions:

“I have discovered that people have copies of a purported vision by the Prophet Joseph Smith given in Nauvoo, and some people are circulating this supposed vision, or revelation, or conversation which the prophet is reported to have held with a number of individuals in the city of Nauvoo. I want to say to you, my brethren and sisters, that if you understand the Church articles and covenants, if you will read the scriptures and become familiar with those things which are recorded in the revelations from the Lord, it will not be necessary for you to ask any questions in regard to the authenticity or otherwise of any purported revelation, vision, or manifestation that proceeds out of darkness, concocted in some corner, surreptitiously presented, and not coming through the proper channels of the Church. Let me add that when a revelation comes for the guidance of this people, you may be sure that it will not be presented in some mysterious manner contrary to the order of the Church. It will go forth in such form that the people will understand that it comes from those who are in authority, for it will be sent either to the presidents of stakes and the bishops of the wards over the signatures of the presiding authorities, Or it will be published in some of the regular papers or magazines under the control and direction of the Church or it will be presented before such a gathering as this, at a general conference. It will not spring up in some distant part of the Church and be in the hands of some obscure individual without authority, and thus be circulated among the Latter-day Saints. Now, you may remember this.”

“The ridiculous story about the “red horse,” and “the black horse,” and “the white horse,” and a lot of trash that has been circulated about and printed and sent around as a great revelation given by the Prophet Joseph Smith, is a matter that was gotten up, I understand, some ten years after the death of the Prophet Joseph Smith, by two of our brethren who put together some broken sentences from the Prophet that they may have heard from time to time, and formulated this so-called revelation out of it, and it was never spoken by the prophet in the manner in which they have put it forth. It is simply false; that is all there is to it.”

“From time to time, accounts of various supposed visions, revelations, and prophecies are spread forth by and among the Latter-day Saints, who should know better than to believe or spread such false information. One of these false and deceptive documents that has cropped up again and again for over a century is the so-called White Horse Prophecy. This supposed prophecy purports to be a long and detailed account by the Prophet Joseph Smith concerning the wars, turmoils, and difficulties which should exist in the last days.”

In 2010 the Church released a statement on the “‘White Horse Prophecy’ and Political Neutrality”:

“The Church of Jesus Christ of Latter-day Saints is politically neutral and does not endorse or promote any candidate, party or platform. Accordingly, we hope that the campaign practices of political candidates would not suggest that their candidacy is supported by or connected to the church. The so-called ‘White Horse Prophecy’ is based on accounts that have not been substantiated by historical research and is not embraced as Church doctrine.”

Some Confusion on the Topic

These statements on the White Horse Prophesy have cause some confusion among members of the church as to what has actually been said. The FAIR website reports:

“Because the White Horse Prophecy has been dismissed by some Church leaders, there has been confusion from members of the Church with regard to other similar statements about the nation crumbling, the Constitution being on the brink of ruin and the Elders of Israel stepping up to save it. While the white horse prophecy may not be legitimate, there are several separate similar statements attributed to Joseph Smith.”
(Fair Website, Accessed May 3, 2017)

It wasn’t until recently that we found the actual statement made by Joseph Smith on the Constitution. In the late 1800’s, there were multiple anti-poligamy laws passed by Congress which put church property in jeopardy. In a future post I will discuss the Morris Act, the Edmunds Act, and the Edmunds-Tucker Act. Under the formal persecution from the US Federal Government, the church distributed many portions of its archive of records to private individuals to be held in safe keeping. This was done primarily under President Wilford Woodruff. It wasn’t until President David O. McKay that the church made a concerted effort to regain ownership of these documents. In this recent retrieval, we have obtained a document containing the actual direct quotation of what Joseph Smith really said:

“Even this nation will be on the verge of crumbling to pieces and tumbling to the ground; and when the Constitution is upon the brink of ruin, this people will be the staff upon which the Nation shall lean, and they shall bear the Constitution away from the very verge of destruction.” 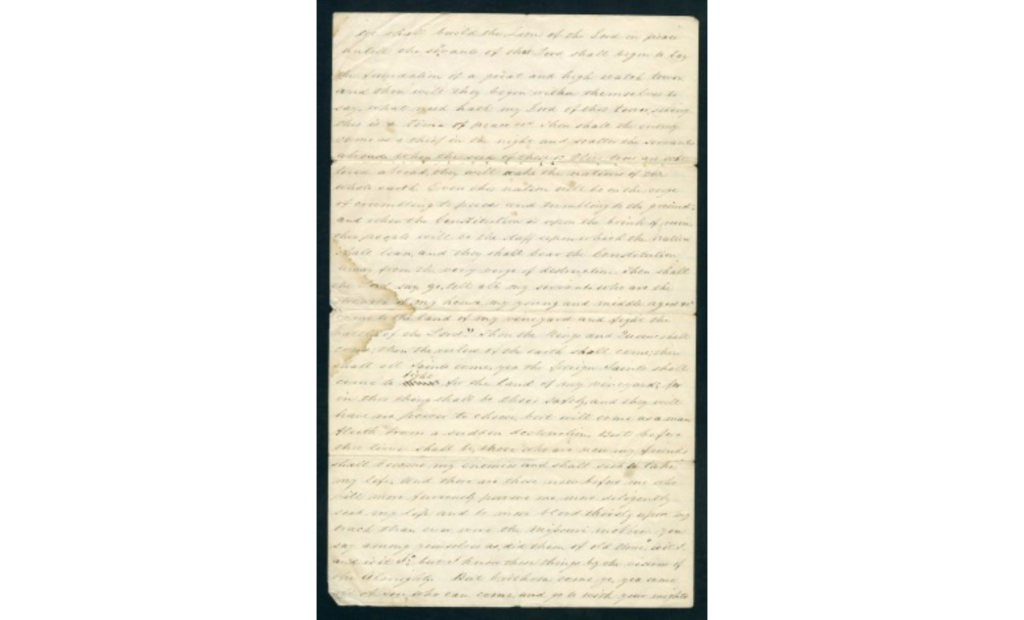 Since so many early members have used the phrase “hang by a thread” and because of Joseph’s interest in the Constitution, it is likely that Joseph made multiple remarks about its destiny and that other unrecorded remarks may have used that phrase. However, this is the statement we have to work with, and it is very clear in its message. The Prophet said that the time will come when the Constitution would be upon the brink of ruin, but that the nation shall lean upon this people until the Constitution shall be saved. There are no “if’s” in his actual, direct quotation.

Finally, considering Eliza R. Snow to be a reliable source, it’s worth using a statement she once made on the matter.

“I heard the Prophet Joseph Smith say… that the time would come when this nation would so far depart from its original purity, its glory, and its love for freedom and its protection of civil rights and religious rights, that the Constitution of our country would hang as it were by a thread. He said, also, that this people, the sons of Zion, would rise up and save the Constitution and bear it off triumphantly.”

Notice that she uses the “hanging by a thread” phrase alongside the statement that the Constitution will, in fact, be saved.