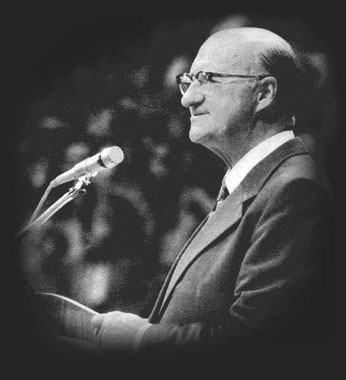 W. Cleon Skousen is best remembered as a popular author, speaker and teacher who lectured in every state and province in North America, and in more than 60 countries world-wide. He was a student of history and a scholar of law, specializing in the principles of Freedom, the U.S. Constitution, economics, and ancient history and scriptures.

W. Cleon Skousen was born in Raymond, Alberta, Canada in 1913 and spent his growing up years in Canada, Mexico, and southern California. At the age of 17, he was called on a mission to Great Britain. He later attended San Bernardino Junior College where he was elected Student Body President and graduated with a bachelors in Theater and Performing Arts.

With scholarships and encouragements, he left California in 1934 to work as a government aid in Washington D.C. He found this work incredibly boring and soon joined the FBI which he believed would be more exciting. It was during his 16 years as an FBI agent that Skousen engaged in a vigorous study on the Constitution from the perspective of the Founding Fathers. While on the East Coast, Skousen received his juris doctor degree from George Washington University Law School. He was admitted to practice law in the District of Columbia and before the District Court of Appeals and the U.S. Supreme Court.

Because of his background in acting and his expertise on the subject of communism, Skousen was asked to return to California to eradicate communist/progressive influences in Hollywood media. During this period of his life, Skousen developed strong relationships with prominent individuals in Hollywood including Ronald Reagan, Walt Disney, Walter Knott, Cecil B. Demille, John Wayne, and Art Linkletter. Skousen mentored Ronald Reagan on the Constitution for the years leading up to and throughout Reagan’s presidency.

Because of Skousen’s background in law enforcement, he eventually accepted a position on the BYU faculty establishing a security and police force. He also established the BYU Student Alumni organization.

Approximately four years later in 1956 and at the strong recommendation of J. Edgar Hoover, the Salt Lake City Mayor hired Skousen as the SLC Chief of Police. A Time Magazine special on Dr..  Skousen claimed that he ran a “model police force” and eliminated all sources of systematic crime in Salt Lake City. During this time he wrote the best-seller The Naked Communist, which was written at the request of David O. McKay, edited by Thomas S. Monson, and recommended several times in General Conference addresses by Ezra Taft Benson. During this same period he worked as the editor for the nations leading police magazine, “Law and Order.” After four years, Skousen was fired as Chief of Police after exposing the new mayor for participating in illegal gambling.

Because of Skousen’s profound understanding of the scriptures, he was petitioned by David O. McKay to work as a religion professor at BYU. Skousen felt unqualified to teach but accepted the offer, and then proceeded to read the Book of Mormon 100 times to gain some personal confidence in his ability to teach. He quickly became one of the most popular professors at BYU with the largest teacher-to-student ratio in the history of the school. The professors who accused him of being “too easy” on his exams were challenged to pass the exams themselves. They each failed. Skousen taught at BYU for ten years.

Skousen eventually transitioned to a career of public speaking and nonprofit educational outreach. His objective was to inspire a love for the Constitution and an admiration of the Founding Fathers and their principles of successful government. Skousen established the Freemen Institute and the National Center for Constitutional Studies and worked for many years promoting a restoration of constitutional separation of powers. Dr. Skousen was closely assisted during these years by his son-in-law Glenn J. Kimber.

His seminars on the Constitution have been taught to several million across the U.S., and among his students were dozens of U.S. Senators and Representatives, two Supreme Court justices, and several candidates for President. He believed knowledge and understanding were key to maintaining a free country, and spent his entire adult life opening up complex issues for deeper understanding by students and audiences all around the world.

Skousen was often approached by General Authorities to write books on specialized subjects. In addition to The Naked Communist mentioned previously, Skousen was asked by David O. McKay to write a book that could be used by “the elders” to save the Constitution. After completing The Making of America, President Ezra Taft Benson provided copies to all current General Authorities, explaining that this volume would be used in the coming years by “the elders” as the standard for understanding and safeguarding the original intent of the Founding Fathers. President Benson taught that the Constitution will in fact be restored and that The Making of America would be our primary resource in that movement. Eight of his books were used as college texts, and several were translated and published in other countries.

Because of Skousen’s demonstrated expertise on the Constitution, he was asked by the leaders of nearly two dozen nations to mentor them on the development of constitutional governments patterned after the intent of the Founding Fathers. He was invited to write a new constitution for Canada and the proposed United States of Latin America, and he published a model constitution that could be adopted by nations everywhere. He was graciously recognized for his work in these countries by Pope John Paul II.

In the weeks prior to his death, Skousen asked his son-in-law Dr. Glenn J. Kimber to direct the freedom program to which Cleon had given his life. W. Cleon Skousen passed away at the age of 93 in 2006. In order to defend Skousen’s name and refute false rumors about his character and standing in the Church, The First Presidency of the Church of Jesus Christ of Latter-day Saints asked the Skousen family for permission to host a second funeral for Cleon the Saturday after the family’s funeral, stating, “On Friday, Cleon belongs to his family. On Saturday, he belongs to the world.” President Monson presided at this funeral service and requested that a DVD be made of the service for free, easy distribution. At the funeral, President Monson made the following comments (highlights):

Often the wisdom of God is foolishness to men, but the greatest single lesson to be learned in mortality is that when God commands and a man obeys, that man will always be right.

Everyone he spoke to, everyone he taught, is closer to Christ than before they met Cleon Skousen.

He has lived a wonderful life, extended, look at all these years, but he has never, ever deviated.

…and the song that Cleon Skousen is hearing: ‘well done thy good and faithful servant; thou hast been faithful over a few things, I will make thee ruler over many things: enter thou into [the joy of] thy lord.’

President Monson read a letter to Mrs. Skousen from the First Presidency (excerpts):

We were saddened to hear of the passing of… our friend” (President Monson then interjected, “The Savior used the word Friend…”)

His fierce loyalty to our country and his attempts to protect our freedoms are well-recognized. As he lifted his voice, both in the books he authored and the speeches he delivered, he was a powerful influence for good…

After reading the letter, President Monson also said, “Our lives are better because of him whom we honor.”

Dr. Skousen and his wife, Jewel Pitcher of San Bernardino, California, are the parents of eight children, 50 grandchildren, and more than 120 great-grandchildren.