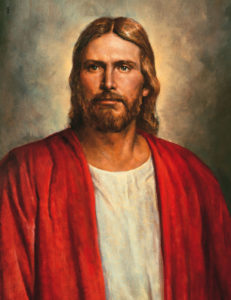 Jesus Christ is the central figure of my faith. He is my Savior and I strive to live the way he did. Only through his name can we be saved and changed into heavenly people.

Whenever Jesus wasn’t on earth and needed someone to lead his church, he called prophets, such as Abraham, Isaac, Jacob, Moses, and many others who he gave the priesthood, or the power and authority of God. When Jesus was on earth, he established The Church of Jesus Christ, an organization led by apostles who he also gave the priesthood, which is the authority to administer saving ordinances. These ordinances were granted to those who make sacred covenants to have faith in him, repent, be baptized, receive the Gift of the Holy Ghost, and strive to keep his commandments for the rest of their lives. While people have followed Christ and his teachings since his sojourn on earth, the priesthood authority of the church was lost when the apostles were killed. The period of time when the true church was not on earth is called the Great Apostasy.

The true and complete Church of Jesus Christ was restored to the earth on April 6, 1830. As a young boy, Joseph Smith of Palmyra, New York was visited by God the Father and his Son Jesus Christ in 1820 when he prayed to know which church to join. He was told that the true church of Jesus Christ was no longer on the earth but that it would be restored in time. Over a period of many years and through many visitations by notable angels such as John the Baptist and the apostles Peter, James, and John, Joseph was chosen to be a modern prophet like those in the Old Testament and he was given the priesthood authority to organize Christ’s true church. The Book of Mormon, an ancient record of God’s dealings with the inhabitants of America, was also given to Joseph Smith who translated it through the gift and power of God.

Today, the Church of Jesus Christ of Latter-day Saints is Christ’s church, once again established on the earth with the authority and power of the priesthood. Jesus Christ is the head of the church and directs the prophet and apostles through revelation, as in times of old. Billions of people have lived and died without hearing about Jesus Christ or receiving the priesthood ordinances needed for salvation. Temples are built across the world which allows members of the church to be baptized vicariously for those who haven’t received the gospel. In life after death, these people have the opportunity to accept or reject these ordinances done on their behalf. The priesthood is the power that makes it possible for couples to remain married beyond death, and for families to be together forever.