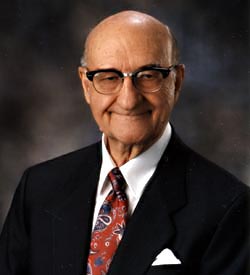 On Monday, January 9th, 2006 at 1:50 in the afternoon, our good friend and founder of NCCS, W. Cleon Skousen, passed away peacefully at his home. In just 11 days from then, he would have turned 93 years old.

How does one write about the life of such an accomplished and beloved man? We present below an edited transcript of the eulogy delivered by Dr. Skousen’s son, Eric, at his funeral service on January 14, 2006.

Dr. W. Cleon Skousen was born on a kitchen table in a small home in Raymond, Alberta, Canada on the night of January 20, 1913. His first name is Willard, after his paternal grandfather, but his mother called him Cleon which means “one to take the place of” as his parents had lost their first child, a boy named Ezra, the preceding year. END_OF_DOCUMENT_TOKEN_TO_BE_REPLACED 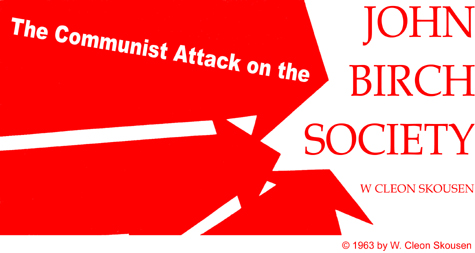 I am not a member of the John Birch Society.

I have simply observed an avalanche of blistering propaganda which has totally confused millions of Americans.

Even a personal check among neighbors and friends will reveal that a vast quantity of well-educated, rational, religious people count it a shining virtue to hate the John Birch Society. Yet they admit knowing practically nothing about it.

The strange thing about the John Birch Society is that practically nobody paid any attention to it until the Communist Party officially ordered its annihilation.

Immediately the withering blast of scathing denunciation began pouring down upon this organization. And it came from all directions. For one solid year the press, radio and TV saturated the American mind with a continuous attack on the “terrible Birchers.”

It seems to me the history of this attack contains a terribly sobering lesson for the American people. END_OF_DOCUMENT_TOKEN_TO_BE_REPLACED